Pitjantjatjara Old Testament Project
A New Generation of Translators
by Paul Eckert 27/4/11
During 2010, after facilitating a Bible Study with a group of Pitjantjatjara Christians at Ernabella, two of the participants approached me. We had been discussing an Old Testament passage contained in Tjukurpa Palya (the Pitjantjatjara Shorter Bible) and had also referred to some passages not present in the volume. Katrina said, "We would like to begin translating the rest of the Old Testament into Pitjantjatjara." And Makinti added, “The Old Testament contains lots of good stories that we can learn from.” 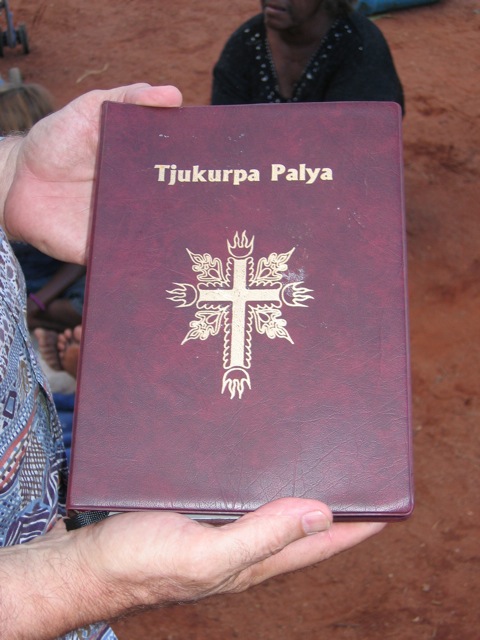 Katrina & Makinti are both mature Christian leaders and deeply committed to the Word of God. They also have important positions in the SA Education Department so I wondered if they meant to resign, but Katrina said, “No, we’ll work on this project after school and on weekends and holidays.”
This was the genesis of what is fast becoming a full blown project.  Tjukurpa Palya had been completed in 2001 and was dedicated at Easter in 2002. This volume contains the whole New Testament and about 15% of the Old Testament (so it is actually the Pitjantjatjara 'Considerably' Shorter Bible). 750 books were printed in 2002 and during the intervening 9 years there have been two more reprints of 500 and then 700 so Tjukurpa Palya is being well used by the Pitjantjatjara people, a group of around 3,000. It is used extensively in church services and other Christian gatherings as well as by individual Christians at home and in Bible studies.
I took note of Katrina & Makinti's desire and in the ensuing months, as I moved around the Aṉangu Pitjantjatjara Yankunytjara Lands I kept my ears to the ground and discovered there were quite a number of Pitjantjatjara Christians wanting, like Katrina & Makinti, to be involved in the Project, both men and women. Encouragingly, they are “next generation” folk, children of those who were involved in the translation of the New Testament. Having been schooled in the heyday of the bilingual program they are all very literate in their own language and readers of Tukurpa Palya. Though they are, on the whole, better bilinguals than the previous generation they feel very strongly about translation. As Makinti said, “We need to have all of God’s Word in our language, so that we can all understand it well.”
We are currently in the project planning phase. It will be a somewhat different process than the New Testament project. By the end of my last trip in April I had a list of over 100 “next generation” people from a dozen communities who are want to to be involved in some way in the project. This includes the experienced translators and checkers from the old Translation Team who are delighted to see their children take on the task and want to support and mentor them. Teamwork is the catch word and people are currently forming themselves into teams to do the work. Church and Bible agencies, like CSIS, Bible Society, AuSIL & Wycliffe are beginning to put in place an ongoing support structure to provide these teams with the training & mentoring that will sustain a long term project. It is hard to know how long it will take but we’re thinking 15 years to complete the Old Testament.
If I'm not mistaken God is putting something together here. Already a young couple from Adelaide who have been working for a couple of years in the Ernabella school have felt the call of God to become involved and are beginning preparations to become members of Wycliffe and AuSIL to eventually be the key translation support workers for the Pitjantjatjara teams. And just recently the old Bible Translation house & office in Ernabella has received a much need face lift from a work party led by Tom Slater of Ringwood North Uniting Church in Melbourne. This will become the hub of the project and the house will be available for the young couple when they begin work in ernest at the end of 2012. Meanwhile the Pitjantjatjara Ministry Resource worker, Rev Peter Greenwood and his new wife, Sue, will be residing there and providing support and encouragement to the Pitjantjatjara translation teams.

Paul, with his wife Ann, was leader of the team that translated the New Testament. He is now 0.8 with Bible Society Australia, filling the role of Production Coordinator for the Remote and Indigenous Ministry Support (RIMS) section and 0.2 with NRCC [Uniting Church] coordinating the development of the Pitjantjatjara Old Testament Project. They currently reside in Adelaide with Paul doing regular trips to the APY Lands.
Khesed Director, John Blacket preached on Easter Sunday at one of our sponsoring churches - an Asian church - and shared about the teams wanting to translate the Pitjantjatjara OT. They were very unreserved in their response - clapped, cheered and shouted 'Hallelujah!'
After the service one of the pastors came up to John in tears, saying he only had one note in his wallet, and wanted to give it as seed gift towards the project.
If you would also like to support the project, please send your donation to the Bible Society earmarked “Pitjantjatjara Old Testament Project”. Either send it to the Bible Society in WA or to Paul Eckert at this address:
Paul Eckert, Production Coordinator,  Remote & Indigenous Ministry Support,  Bible Society Australia, 770 South Rd, Glandore, SA 5037 | This email address is being protected from spambots. You need JavaScript enabled to view it.    T: +61 8 8292 4888 | M: +61 0427 569 287 | F: +61 8 8292 4899   www.biblesociety.com.au For large files use:\http://dropbox.yousendit.com/PaulEckert6711285
Making the Bible available and accessible for Indigenous Australians.